my memoirs: my father
Previous
Next

Well, one or two things have happened today, but if I were to tell you the censor would only make a mess of my letter, so that’s that. I suppose I can tell you that we have not yet sailed, and that’s about all. I don’t think there is much chance of getting this letter away, so my pal and I have decided to make a kind of diary and write a bit each day and then post it at the earliest opportunity.

There is a first class bar on this ship which we use – whisky 3d! a tot and so on. We were up there tonight and we were promptly nailed for “Black-out Duty”, reporting to the orderly room at 11 p.m. so Lord knows when we shall get to bed, which reminds me, I haven’t made my bed yet, so I shall have to hurry with this day’s diary.

“I miss you most of all when day is done”
Goodnight

Well my dear, another day has passed with little to report. We eventually retired to our lonely little bunks at 4 A.M. Naturally we both overslept and missed breakfast – but we made up for it at dinner – when I tell you what it was – well – Irish stew, containing mutton, carrots, parsnips, beans and potatoes. I put away the lot – and enjoyed it.

I am now i/c cleaning on the port side of our deck and that is about all the general news.

How is everything, dear? You will, or should, have a lot to tell me when I get your first letter. When I tell you where to address your letters, don’t forget that none of yours have reached me yet, so tell me all the news from the day I left.

How are little Jean and Janet, my pal thinks they look grand kids – he is right too! Their photo is popped up beside yours on the dressing table.

Apart from the fact dear that I wish more than anything in the world that you and the kids were with me, I have everything I want and should be getting along fine. Sleep tight, and if you dream, dream of me.

Dear, here we are again – once more with very little news – I was bagged for the Orderly Room today and discovered that the C.O. was an officer from Hendon with whom I used to have arguments regarding auxiliary officers (I hope he doesn’t remember) and that the adjutant was an ex-W.O. from Uxbridge with whom I used to play cricket – and I thought that everything in the garden was lovely: but I hear the C.O. was most annoyed with the way Orders were sent out today, - so I am looking forward to tomorrow with trepidation.

If I refer to Jack, that will mean my pal Flight Hussey. Anyway Jack and I were feeling extra solemn and morbid tonight – so we went up to the WO’s mess and had a drink or two and consequently felt more cheerful.

That my dear, is the day’s activity. I’m glad I have a job really, because it stops me sitting around and thinking. When I see the sea sparkling in the sunlight, with the mountains, blue, or mauve, snowcapped, in the distance it makes me feel terribly sentimental somehow, and I think how marvellous the place would be if you were by my side. I look at the mountains, colourful and grand, with the sloping hills, covered by trees with houses nestling here and there and a lump comes into my throat at the beauty of it all. 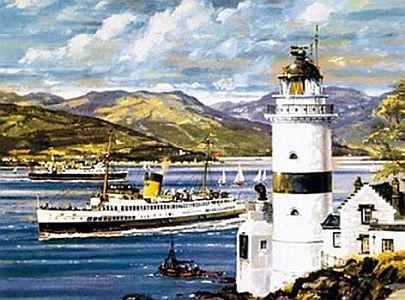 the Firth of Clyde, from an old British Railways poster, and much as my father would have seen it - except the ferries would have been replaced by troop ships and battle cruisers, of course
Love is a marvellous thing, but it can be so cruel – poor old Jack gets depressed sometimes, (most times) and I whisper “There will come another day” – and when I say that to him I repeat it to myself, and I think what a marvellous day that will be. Well, my dear, I mustn’t go on like this as you will think I am crazy. If you don’t, the censor will. So I will say Au revoir once more – Goodnight.

Hello, Angel, here we are at the end of another day, it has been rather a busy day for me now that I am in the Orderly Room. We have not yet progressed in our journey, but any day now.

As I have already remarked I have had a busy day, but everything seems to have gone smoothly. I didn’t finish until 7.30. p.m. and then I had a wash and Jack and I took a turn around the deck, and then went to the W.O.’s saloon for a nightcap. As per usual we were entangled with several others and it was 10 p.m. before we cut ourselves adrift. I returned to my cabin, thinking of making my bed before writing to you – but imagine my surprise when I discovered my bed neatly made. Jack had done it whilst I was working.

You remember I bought two enlargements of snaps with me – one of Jean and Janet and one of you with the children. I sat gazing at the last mentioned for about 10 minutes tonight before writing. Somehow I feel that I left a lot undone at our parting. Do you remember our parting on the station? Just a casual goodbye and a kiss, whilst all the time I was longing to hold you tight and never let you go. When I think you might be worrying about me, I wish there was some means of communicating with you, just to let you know that I am quite alright and that there is absolutely nothing to worry about.

I often wonder whether Jean and Janet will remember me when I come home. After all two or three years to a kid of 5 is a long time. Do they miss me? You used to think that I regarded them as a nuisance, but secretly I thought they were the best kids in the world.

Well my dear, my pen is running out – I will fill it in the orderly room tomorrow, but in the meantime I will finish this letter in pencil, so here goes: no! I will carry on as far as possible. Jack just compared this page with no. 1. and says that you will know I have had a lot to drink because it is not so close and neat. I hope dear that I am not writing a lot of tripe, but having little news which I’m allowed to convey – I let my pen wander as my thoughts take me, and I think it has wandered far enough tonight so I will say the old Goodnight.

Au Revoir – Yours until the warm Gulf Stream freezes, Bill.
Next
Previous