My Time as Head Barman in a Country Hotel 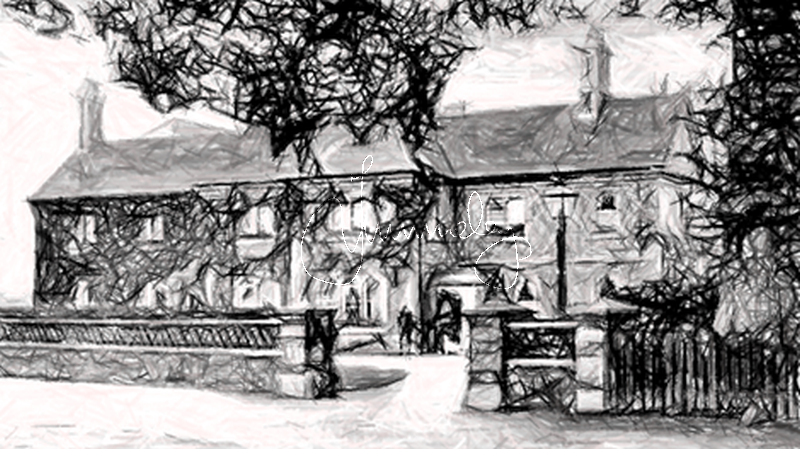 It was the late 1960s and some friends, whose parents were running a hotel near Marlborough, a market town in Wiltshire, had asked me if I would like a job as barman. I needed desperately to get out of London for a while and so I jumped at the chance.

It was October, but still sunny and warm, and I was on a train heading for Hungerford. Once we had gone through Newbury it was as though we had gone through a border of some kind where even time was different. It was more rural, more quiet, slower, an altogether older landscape. It was as though the once famous advertising hoardings for Strong’s beer, of Romsey, were still in the fields at the side of the railway – ‘You’re Now Approaching Strong Country’. I remember the train stopping at Kintbury and it was quiet and still, no one left, no one came, someone cleared his throat, and a blackbird sang close by, and round him, all the birds of Berkshire and Wiltshire; an old railway station of another time, another place. There were gently flowing waterways everywhere and watercress beds in the clear chalk streams, as there used to be in so many places where clean shallow water ran.

Hungerford was not my final destination, but it was as far as I could go by train. The ’bus I took travelled along the A4, still the main road from London to the west and Wales (there was no M4 motorway in those days) and I arrived in Marlborough in the early afternoon, on market day. I discovered that the first bus heading in my direction was late afternoon, timed to fit in with the people who had spent the day at the market; I say at the market, but some of them I think had spent a good part of their time in the pub, because the people in the queue were loud and bawdy and raucous, but good-natured. They all had bags of market produce, and a couple of people even had baskets of ducklings. I felt quite self-conscious lugging my rucksack on to the bus.

I looked back at the town as the bus struggled up a hill to notice that the smoke rising from the chimneys in the still evening air was beginning to mingle with the autumnal mist. The bus rattled through the countryside, skirting the huge Forest for much of the way until we reached a point where the road heading south passed over a railway which passed over a disused canal, both westbound. Eventually the driver said, “This is where you get off young man” and so I did. I stood at the side of the road as the bus disappeared and could see only a lonely crossroads with no direction sign. I had no idea which way to go but then saw an old, faded, painted sign for the hotel which I don’t think had had anything done to it since before the war.

I headed off in the direction of the hotel down a narrow lane. It ran past a copse on one side, still littered with anti-tank devices, and a freshly ploughed field the other, the furrows still shiny where the share had turned the earth over. A few lapwings were feeding there still. I seemed to walk quite a way with no sign of a building of any kind, or any sign of human life, but then the lane swung slowly round until, at its end, was my first view of the hotel. From behind, the first part of the hotel, which was storerooms and outbuildings, was windowless but then there were the two storeys of the hotel itself, with fairly grand looking windows. The ground floor windows were of the hotel lounge, while upstairs were the bedrooms. When I went round to the front I found a slightly formal building, partially covered with deep red Virginia creeper, with a prominent central section and a wing either side. On the right were the bars, and to the left the hotel, each wing having its own entrance. Its name, Savernake Forest Hotel, was engraved into the stone gate pillars that were at either end of the looping drive. Even on this first visit it seemed familiar, comfortable, as if I’d known it most of my life, or even in another life.

I went in and found my friends and their parents, the Major and his wife, who all greeted me enthusiastically and took me to one of the bars, where we got slightly merry. The Major then they showed me to my room – the skivvy’s room, over the back stairs. (That's me, a self-portrait done in the skivvy's room).

A small room but comfortable, with a wash-basin in one corner and a window which looked out on the hotel yard. I relaxed that evening, reading, and started work the next morning.

My first job each day was to go out to the store shed in the hotel yard and fetch the logs in for the fires in each of the bars and the hotel lounge. Sometimes it was so cold my hands stuck to the frost on the metal handles of the wheelbarrow. Only when I had brought the logs in could I have breakfast, always a good-sized fry-up, taken at my leisure. Once that was over I was back in the bars making up the fires, stocking the shelves, and checking the barrels and the beer pumps. I was then ready to open the doors and wait to see if any customers arrived. This was the time when pubs opened at 10.30 in the morning and closed at 2.30 in the afternoon, before opening again at 5.30 in the evening. It wouldn’t have mattered if they had been open all day though, for I still would have had very few customers on a weekday.

There were three bars to look after; the Tap Room, the Farmers’ Bar and the Hotel Bar, which just about reflected the social strata that happened to exist in the area. Into the Tap Room came the farm workers, the railway gang occasionally, while they worked on the line that ran by the hotel, and other assorted labourers. The Farmers’ Bar welcomed the local garage owner; the farmers (of course); Harold, who owned the transport café on the A4; and most of the passing and evening trade.

There were also odd assorted individuals like Bob Crook, (shown here) known as the rudest man in Wiltshire, and with whom I had an almighty bust-up one night: I came off best. The Hotel Bar entertained the hotel guests; the landowners; the landed gentry (I make a distinction between land-owners and landed gentry because some of the land-owners were quite definitely not gentry); some of the teachers from the nearby prep school; and finally, Cedric, the 7th Marquis of Ailesbury, whose magnificent house the prep school was – as indeed was the enormous nearby Forest with its Grand Avenue of grand beeches, all four miles of it.

cont in part 2
Next
Previous