my memoirs: reed's school
Previous
Next

the school bully is now dead ...

... and you can't libel a dead person - not that any of what follows, being absolutely true, is libellous in any case
This is from the Reeder, the magazine for old Reedonians, in the In Memoriam section.

John was born on 20th August 1942 at Kimberworth, Rotherham, son of Ronald and Nellie. His father had been invalided out of the RAF and was working as a transport manager. At the end of the War, the family moved to Watford and after living for a time with his grandfather in South Ealing, they moved back to Rotherham where he attended Herringthorpe Junior School.

On the death of his father in October 1950, with the help of the Bishop of Sheffield and assistance from the Royal Airforce [sic] Benevolent fund, he joined Reed’s in September 1953. John left School in July 1959 and started work as a police cadet in Newark." 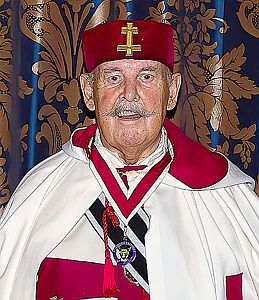 He joined Reed's School in 1953 - he left in 1959. Nothing whatsoever about his achievements while he was there, probablly because there weren't any, apart from one - he held the position, very successfully, of School Bully.

This is him in later life, dressed as I don't know what, possibly for a pantomime or for an appearance as The Lord High Executioner in the Mikado.

My first experience of him was in my first year at Reed's, when I was aged just eleven. We were all on a cross country run through Oxshott woods and I was quite enjoying it but we suddenly came across him blocking our way. He was holding a very big stick, waving it about, and threatening us not to overtake him. He was being lazy and it would have looked bad if he came last but I honestly thought he was joking and just kept running. I was alright but I heard later that he had laid about some of the other boys.

I don't really remember anything else about him until I was 13 and was sat opposite him, for the whole year, at the long refectory table in the dining room that we used for mealtimes. At some stage, fairly early in the year, he started in on me but in ways not at all obvious. He started by knocking over the water jug "accidentally" so that the water went all over me. He then made me go to get it refilled. After that he started kicking me under the table until my shins were a mass of bruises, as well as tipping the water over me - and I never said anything. Why? You have to remember that this was in the 1950s. People expected to be bullied. And you didn't sneak; that was a greater sin than the bullying. It stopped at the end of the year when he left Reed's and joined the Police.

I understand from a friend from school though, who got on the wrong side of him when he was in the Police, that his bullying still continued.

A wise and tolerant man in the village where I live said to me some years ago "Each one of us has our own battles to fight".

And so it may have been with Wimbleton. His father was in the RAF, as was mine: he was eight when his father died, I was nine; the RAF Benevolent Fund paid for him to go to Reed's, as it did for me. I know how all that affected me, perhaps Wimbleton too, although the outcome was different.
Next
Previous